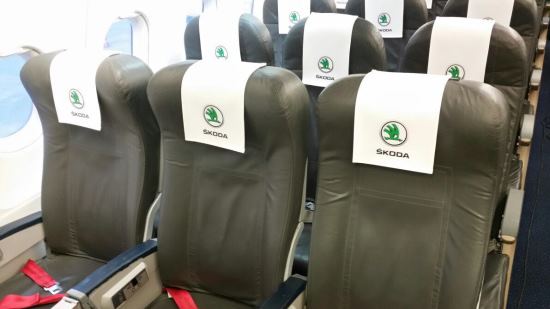 ŠKODA AUTO a.s. appointed ACS to transport 9,000 passengers in groups ranging from 8 to 240, from 29 countries, to Faro, Portugal for training on the new ŠKODA KODIAQ, returning them the following day.

ŠKODA AUTO a.s. appointed ACS to transport 9,000 passengers in groups ranging from 8 to 240, from 29 countries, to Faro, Portugal for training on the new ŠKODA KODIAQ, returning them the following day.

This was a very complicated request operating multiple flights on a daily basis for six weeks, arriving into a single airport. ACS put together an operating schedule utilising our local offices to ensure we found the best aircraft which complied with the compliance rules set out by ŠKODA AUTO. In some cases we organised flights to stop off en-route to pick up extra groups, and in others we bought groups into a central hub to then fly them to Faro all together, which was a more competitive option and helped ease airport congestion. For some flights the number of people flying was more suited to a smaller aircraft, at which point we involved our Executive Jets team and utilised their knowledge and experience in sourcing the best aircraft and airports for the job. As a number of airports being used were in colder regions, we built in a 30 minute buffer in case of de-icing, to ensure we were still able to run on time. Before the Skoda programme commenced we had a meeting in Faro bringing together representatives from the airport such as check-in supervisors, ramp agents and handling agents, as well as security, the police, caterers, handling agents and operators to ensure everyone was up to speed.

During the programme we had ACS flight reps on every flight, utilising those from local offices to help with communication and to make the most of their local knowledge. Our offices in Paris, Spain and Germany contributed heavily to the success of the programme. To help with congestion at the airport and ensure optimal check-in and boarding speed, we pre-printed boarding cards to give to passengers on arrival. Both in the terminal and on board the aircraft we also arranged for ŠKODA AUTO branding to be present. In total we organised 187 flights, using 14 different airlines and 11 different types of aircraft. Despite challenges such as snowstorms, airport congestion, late passenger arrivals, and a French air traffic control strike, we ensured delays were minimal and thanks to our charter expertise and global infrastructure were able to rearrange all onward travel which was affected.

FLIGHT REPRESENTATION: We had a charter expert on board every flight, with 20 ACS reps in the sky, supported by our dedicated team of charter and operations experts back at head office, who were overseeing the programme. We kept Skoda up to date with each step of the 187 individual charters, including info on check-in desks, aircraft movements and passenger numbers, no shows and baggage counts.

CATERING: Depending on the length of the flight we had various levels of catering; from light snacks and sandwiches to hot three-course meals.

HANDLING: ACS was the lynchpin of the entire operation, working with over 14 airlines, as well as many ground handling agents, security, police, catering and of course ŠKODA AUTO HQ.